Third game of the year, and another game of Epic.

Mark and I have been talking about getting in a game of Epic for a very long time, and we finally managed it.


I stuck with my Guard, while Mark brought the "13th Legion" list, which I had never heard of or seen in action.  We had previously agreed to play without any flyers, and as such I had some extra points to spend.  After some thought I added in a Super Heavy Tank Company, consisting of 2 Shadowswords and Baneblade.  I thought some added anti-titan firepower would be useful ,and if nothing else they could be used for picking of Land Raiders that I know Mark is quite fond of.

Mark's force consisted of lots of Infantry detachments, some of which were mechanized in a combination of Rhinos and Land Raiders. 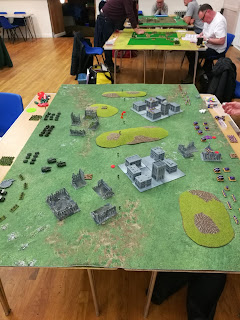 Deployment was fairly standard, with the Chaos Marine spread evenly across the board, and the guard doing something similar.

First turn and against all the odds the Guard managed to get imitative!  Never one to look a gift horse in the mouth I activated the Super Heavies and used them to vaporize two Land Raiders, killing the troops inside and breaking the formation. Not a bad start.

That set the tone for the game, with my Guard performing quite well and only failing a couple of activation tests throughout the game.  Mark had some terrible luck with some poor saving throws and unlucky activation rolls. 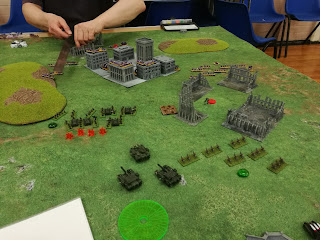 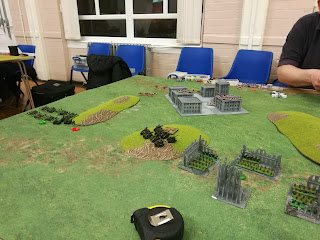 We managed to play three turns, with me able to force the Chaos Right Flank and break through to the their back field, and Mark able to push on his right flank and get some serious gains.  In the end we ran out of time and had to call it a night.  The final score was something like 1-0 to the Guard on objectives, but as you would usually play a fourth turn and it looked like the game could easily go either way we decided to call it a draw.

Another excellent game of Epic, and against a new opponent, fielding an army that I had never played against as well. Also, my lone Sentinal Ace, Geoff, once again was the soul survivor from the Sentinal Squadron. Gonna get that man  a medal.