I have tried a few of Daniel Mersey's rules before, namely Dux Bellorum and Lion Rampant. Dux Bellorum was ok, but I didn't feel it had legs and the test game of Lion Rampant we tried was a complete disaster.
I have had Dragon Rampant fro a while but have never done anything with it, but lately I have been playing quite a lot of Fantasy type games and have found them to be unsatisfying, largely due to the endless need to bow to the demands of the tournament mindset.  Dragon Rampant is probably as far away from a tournament set of rules that you can get. The game is more of a toolbox, with a series of different profile available to everyone to use, and no strict rules on rules or model range. There is one profile for heavy cavalry, regardless of them being an elf on a horse, Orc on a boar or heavily armoured Knight. The same applies for the Infantry, with an Elf Spearman being the same as an Orc one.  These basic profiles can be altered slightly, with a few options or by adding in some fantastical rules such as venomous of flight.  There is even no strict rules on the number of models you use. If you want to represent a mighty hero then pick a troop type, modify to taste and then make the unit a reduced model count, represented by a single model. This single model will have the same abilities as a regular unit, but as he is only 1 model he will have the appearance of being a mighty champion.  There are also rules for undead and wizards and the book provides a well rounded set of options to create almost any fantasy trope you can think of.
For our game we decided to have a kinstrife, with me using my Dark Elf's and David bringing his recently acquired Wood Elves.

My force consisted of:

For our first try we opted for a straight up fight, to get used to the rules.  In Dragon Rampant you must successfully test on 2 dice to activate your groups. The target number you need to equal or better depends on the troop type and whether or not they are suited to that kind of action. Elite Riders, being elite need to score a 5 or more on 2 dice to successfully move, while the Scouts, being a bit reluctant to get into any fights would need to score a 7 or above on two dice to engage in any kind of fisticuffs.  You select each unit in turn, declare its intended action and then roll your dice. If you succeed then the unit has decided to do as it was told and you can complete the action, be it move, shoot or attack.  if you fail to meet the target score your unit fails to activate and your turn ends, handing activation on to your opponent.   This means that no action is ever a sure thing, and we had a few instances in our games where bold tactical moves failed miserably as the troops involved  decided that the plan looked a little but too risky and failed to activate, handing the initiative over to the other player.

I expected the activation mechanic to be the cause of a lot of frustration, as it is similar to Warmaster and I depite my best efforts I struggle to enjoy playing that game.  My dice behaved though, and I managed a fairly seamless first couple of turns, with an almost 100% success rate on my activations. Dave was not so lucky though and had a few stalls when trying to get off his baseline.

We ended up deployed in opposite corners and basically swung our forces round to face each other. I had to endure a round or two so shooting, with my spear unit taking heavy casualties and deciding that they had enough and running away, before I managed to get a charge in.

Combat is fairly simple in Dragon Rampant.  Your units roll either 12 or 6 dice, depending on whether or not it if above half strength or half strength and below.  The target number you need to hit is dictated by your troop type and whether you are attacking or defending.  Light Spearmen, who are defensive in nature need a 4 or better to hit when being attacked, but need a 5 or better when doing the attacking.  Bellicose foot are the opposite, requiring a 3 or better to hit when attacking, and a 6 to hit when defending themselves.  Every troop type has an armour rating, and it requires that many hits to remove a point of strength from the unit. Elite Riders have armour 4, and so require 4 hits to lose a point of strength, while Skirmishers only have armour 1 and so only require 1 hit to remove a point of strength. A unite will start with either 6 or 12 heath points, and they drop in effectiveness when they drop to half points or below.

Morale is also very simple, with a test required every time that you take casualties. Once again it is two dice rolled against a target number, as dictated by your troop type minus any casualties. if you get below the target number then the unit becomes "battered" and will start to flee the field, shedding strength points as you go until you manage to rally them. If the result is zero or less then the unit has just had enough and routs from the filed, coming straight of the table.

The first game resulted in a Dark Elf victory, mainly thanks to me passing a lot of my activation tests. The game did not take long so we decided to have another go. This time Dave changed his army somewhat, swapping out one unit of light missiles for a unite of light spears, while making the other unit of missiles invisible meaning that I was unable to shoot them.
this time we played a scenario, chosen randomly from the back of the book. We ended up doing a treasure hunt, with 10 gems on the table up for grabs. Whoever had the most when all the gem were grabbed would be the winner, and both sides grabbed the same amount then it would default to last man standing.  In the end we managed to get 5 gems each and ended up having to fight it out.


Both sides were a bit cautious, and trying to hug the cover. In the end the stalemate was broken when Dave managed 10 out of 12 hits on the unit of Dark Elf Spears, causing the remaining unit to rout from the field. The wood elves seized this advantage and advanced, while the Dark Elves ran fro cover to avoid the invisible arrows raining down on them.  In the end the Dark Elves decided enough was enough and advanced with the Knights towards the Elven Archers, while ordering the scouts to get in the way and provide cover.  The scouts did this and paid for their bravery with their lives, leaving the Dark Elf knights ready to charge. the Dark Elves promptly failed their Attack Test (probably not convinced that this was where the invisible archers were located), leaving them standing in the open in front of a bunch of Elven Archers. On Dave's turn I expected the worst but he promptly failed his shoot test!  The elves were obviously getting a bit jittery about the knights in front of them. Thankfully the Dark Elves came to a decision and charged in next turn, passing their activation test. That was the end of the Wood Elf Archers, and allowed the Dark Elf knights to start to swing round behind the Wood Elf forces. 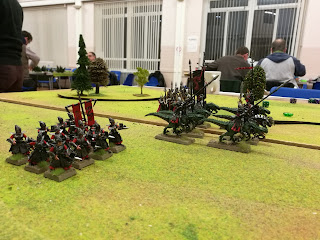 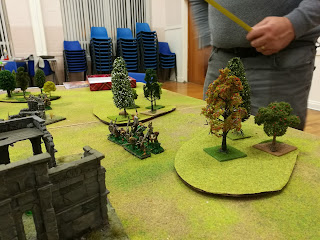 Elsewhere the Dark Elves were trying to stall the remaining wood elves while their cavalry did their business, but eventually they manage to get stuck in, and with overwhelming numbers on their side the Wood Elves were soon overwhelmed. 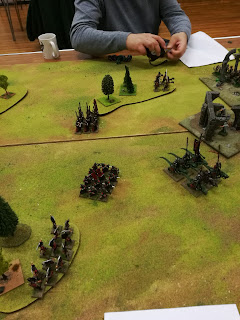 So two games of Dragon Rampant in one night, both of which were quite entertaining.  My initial impressions are pretty favourable, with the game having some good options and not being subject to min-maxing.  I look at the book as more of a toolbox, to create some interesting games with and am already wondering about the possibility of using the rules to visit middle earth with.  I was very lucky on both games, with my forces successfully passing more than their fair share of activation tests, while Dave managed to fail more than a few.  Having the best troops in the world wont help you if you can't get them to do anything!  I am definitely going to try and get some more games in, and see if I enjoy it as much when my troops won't budge of their baseline all game!
Posted by Kevtheinx at 13:16