This week Ian and I finally managed to get a free week and decided to give Kings of War 2nd edition a try.   Ian pre-ordered his direct from Mantic and has had his copy for several weeks now.  O jumped on the Kickstarter for the rulebooks only and have yet to receive anything, so thanks a bunch Mantic.

As it was our first game we opted for 2000 points, straight fight with no terrain as that would give us the best test of the combat system.
As I had not yet received my book I did a basic force using the free lists and then modified it on the night using Ian rulebook.  My force consisted of:

We deployed pretty much in a straight line opposite each other and advanced.  One unit of my skulks was the first casualty, run over by a unit of Ogre Chariots, and in my turn two the two sided got stuck in properly with engagement breaking out all along the battle lines.   My Ax hordes proved to be no match for the Ogre onslaught, with one horde going down in one turn to the Ogre Legion (how many dice?!), with the second one succumbing to a flank attack late on in the game.  Elsewhere on my right flank the combination of Morax and Chariots succeeded in destroying the Ogre left flank, while the Ogre heavy hitters destroyed my centre.   Late game and the battle had swung with my left flank turning to face the Ogre centre, but the game only lasted 6 turns so we had to call it there, resulting in a draw.   We did a few things wrong I think, and only one person having access to the rules did not help either. 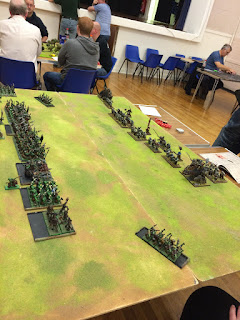 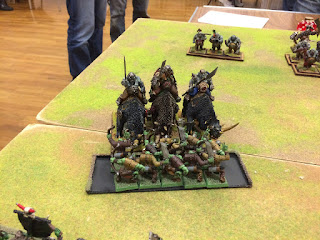 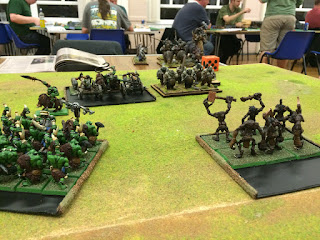 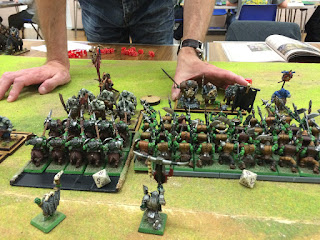 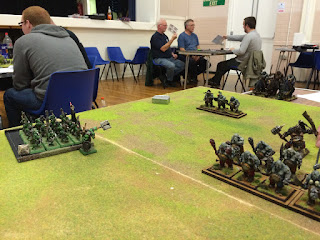 My initial thoughts on the game were pretty much confirmed by tonight’s effort.  Like the element based style, you can put lots on the table and still finish in an evening quite comfortably but the game is very IGO UGO, which I am not sure I like.   There were a couple of instanced where a unit was destroyed in one round, without actually doing any damage to its attackers at all. Which seems wrong to me.  We will try it again sometime soon, and this time use some terrain and a different scenario. Perhaps I will have a try with my Dark Elves as the two armies on the table tonight were very basic, leaving little room for fancy tactics.  We will definitely play a few more games though as it is better than Warhammer 8th, and we don’t mention Age of Sigmar…

Now is only Mantic would sort themselves out and send me my sodding copy of the rules…..

I am planning on doing an entry on Kickstarter soon, but was waiting for a few things to happen first (Im looking at you Prodos games!!!!!!) but it might be that waiting for that to arrive means I will never get round to it, so I might write it up soon anyway.
Posted by Kevtheinx at 09:10