Monday saw the conclusion of our Chain of Command campaign, "48 Hours in May", with the German assault on the French town of Mont Lambert.  I was joined by Andy and Alistair, while lined against us were Ian, Allan and Barry.

We had decided to do the final assault as a Big Chain of Command game, with the remains of the six platoons involved in the campaign all on the table at once, plus any support.  The scenario was to be the Flank Attack from the main rulebook.

My Platoon had managed to get off rather lightly so far, with only a few casualties, whereas everyone else was down a squad or so.  The support totals worked out at 20 for us, and about 15 for the French.


After a quick look at the terrain we opted to separate the table into three separate quadrants, each with its own particular needs in terms of support. The western platoon would have to assault the village so we assigned a flamethrower squad, perfect for clearing buildings. The flank attack would have to cover the most ground so was assigned am armoured car and a heavy machine gun team, along with emplacement. The central platoon would have decent lines of site at the French position and so had a spotter for an off table mortar attached.  In addition to this we selected a minefield to help block the road for any French tanks, an adjutant to allow to deploy our senior commanders quickly to maximise command and a pre game barrage to disrupt the French deployment. In the end Andy took the right, I took the centre and Alistair took the flank attack.  Our plan was to close down the French positions and limit their movement, thus limiting their firepower and bunching them up for a good mortar barrage.

The patrol phase went very well, with us able to prevent the French from getting any jump off points in the village, giving us some breathing space for advancement.  We also mange to get some very good overlapping fields of fire on the French left flank which would prove a decisive factor later on in the game. 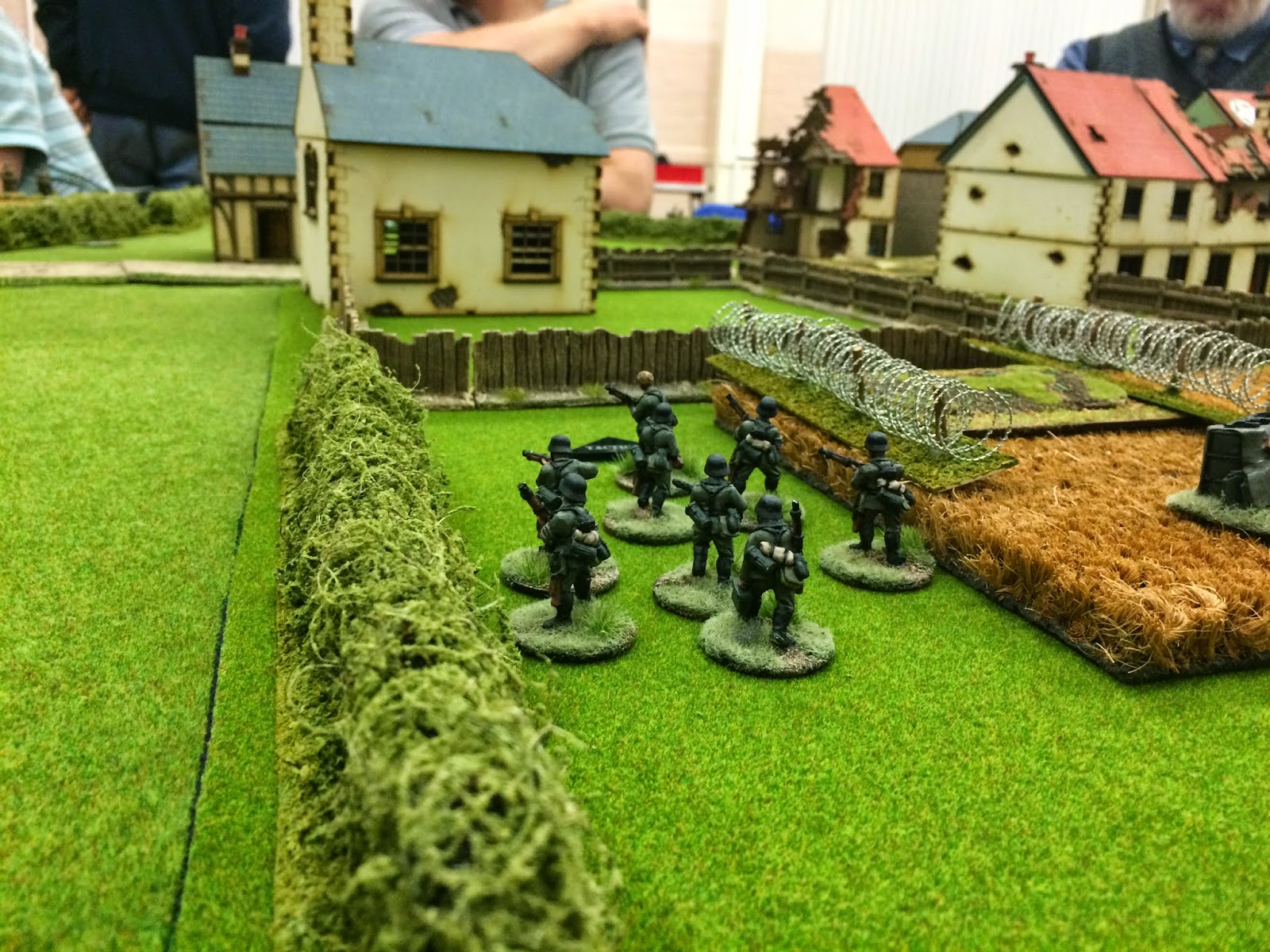 The pre game barrage really made a mess of the French early game deployment, with hardly any troops getting onto the table. The allowed Andy to run a German squad right up the table and shut down one of the French jump off points before it had even been used.  On our flank the Germans advance was stalled by the appearance of a single French squad in a cornfield, but this quickly turned into a one sided affair when the Germans started to bring their numbers and firepower to bare.
On the German right Andy had consolidated into the village, covering off all the French advances and trapping them behind a barn on the opposite side of the road.  In the centre I continued my advance, acting as an anchor to the flank attack and threatening a crossfire if any French decided to deploy against our flank attack.
Mid game and our armoured car turned up!  Then got destroyed by a sneakily deployed anti tank gun, which was itself then destroyed by combined fire from the German centre and flank. Alistair managed to quickly overwhelm the French left, pushing them back towards the centre of the board, while Andy and I forced them to bunch up in a small area behind some hedges.
As soon as they were suitably bunched up I started to call in my mortar barrage, which managed to cover most of the French centre.  At thus point we were running short on time, so we stopped to take stock of the game.  One French Platoon was pretty much broken, another was trapped under a mortar barrage, and a third was trying its best to break out of confinement across some open ground. The German casualties were minimal, with a strong position from which to assault the French, or sit back and let the mortars do their job.  The GM decided to call it in favour of the Germans, although we did not actually finish the game. 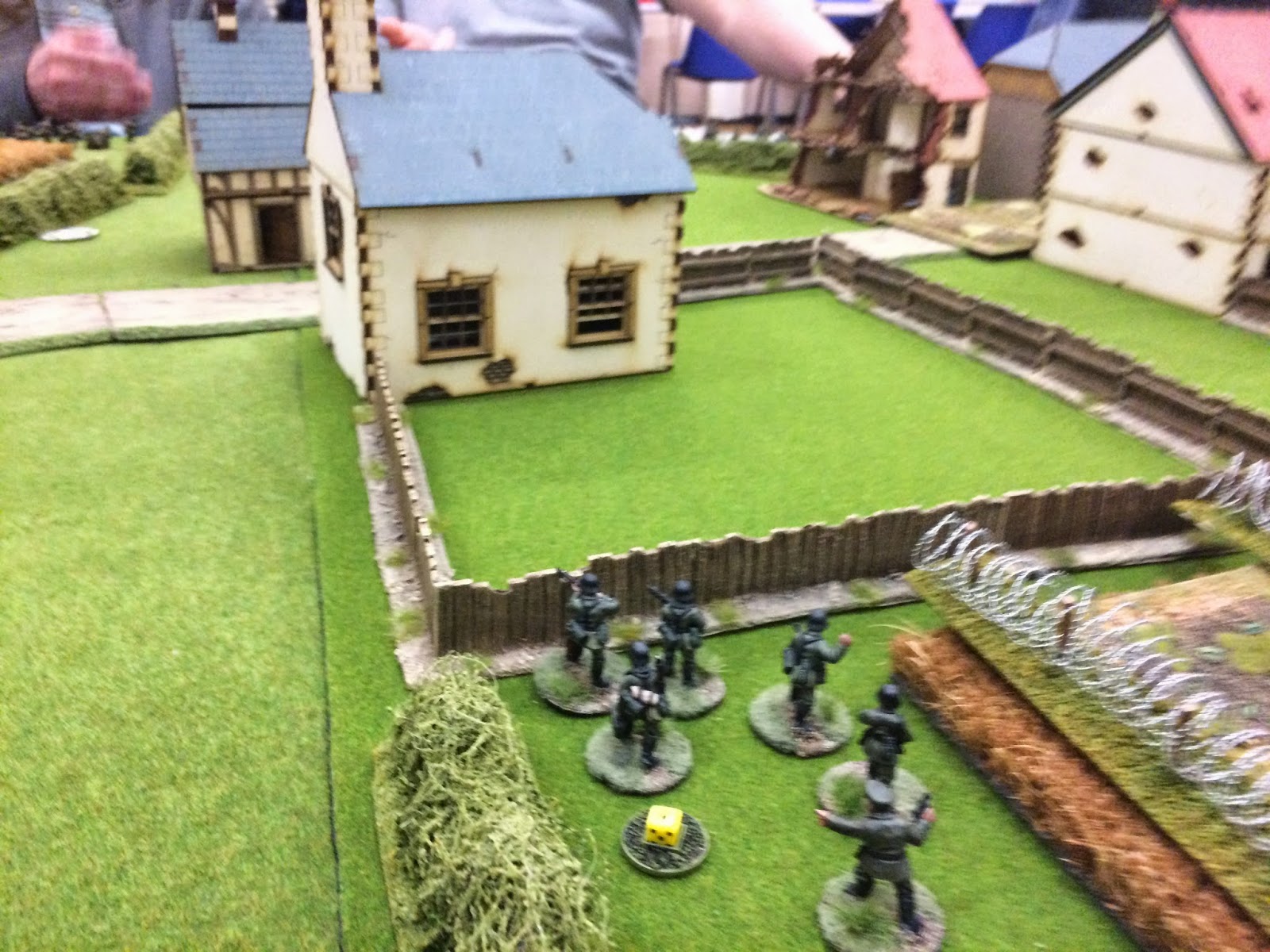 A very satisfying end to the campaign (from the German point of view anyway!), with another very interesting game.  I think our success during the patrol phase went a long way to putting the French on the back foot, and also the pre game barrage proved very valuable. Alistair did a large portion of the German heavy lifting, getting right in the teeth of the firefight, but he was up to the job as he was ably supported by an armoured car and a heavy machine gun.  Andy lucked out quite early and thanks to closing a French Jump Off point very early in the game did not have too hard a time of it.  My Germans in the centre did not really have that much to do. I provided the threat of flanking fire to any French that deployed to close to our flank attack and kept the French bottled up in the middle of the board.  As for the French they were very unlucky as the pre-game barrage really made a mess of their plans, but they came out and gave it a god go, especially Ian who was hampered by some terrible deployment options and some even worse dice rolling!

All in all a great campaign, well run by John and with everyone getting into the spirit of things.  A good narrative campaign makes all the difference to a game, with the consequences of success or failure in having a direct impact on locations and future assaults/defences. That added an extra level of interest and challenge to the outcomes of our games and I am already looking forward to our next campaign.  The fact the Chain of Command plays so well and it is very difficult to play any nasty bending of the rules also helps a lot!

Next week is round four of out Necromunda campaign.  You can never have too many campaigns going on!